When a whip-smart student ambassador is sent on a high-stakes diplomatic mission to a far away land, he and a newly crowned boy king are thrust into a globe-trotting action-adventure mystery set in the real world where dangers mount and smarts save the day!

When eight-year-old student ambassador Joseph Bazan wins a photo op with the President of the United States, he doesn’t know quite what to expect, but it certainly isn’t hanging out with the leader of the free world in a secret compartment in the resolute desk! Joseph’s pluck and kid logic not only charm the president, but they soon help resolve a thorny trade dispute. This gives POTUS an idea. Across the ocean, eight-year-old boy king Nang Nukatau III has taken his father’s crown and clumsily stumbled into an international incident, and now Joseph’s got a pressing mission: talk the tiny dictator back from the brink of war!

The diplomatic slumber party soon goes from awkward to scary as the castle is stormed and the boys are lost across South Korea and Japan where they have to outrun bad guys, learn to read Hangul, unravel the riddle of Gyeongbok Palace, break out of an abandoned bathhouse, befriend an army of snow monkeys, and crack the Case of the Missing Dragon, all while showing Nang how to live in a world where everyone doesn’t always bow to you. Can a kid with a C+ in social studies solve the mystery and teach a king to be a kid?

Student Ambassador: The Missing Dragon is a globe-trotting action-adventure set in the real world where dangers mount, the stakes are high, and smarts save the day! 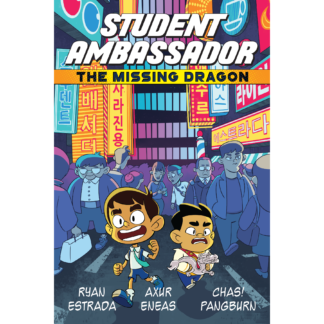