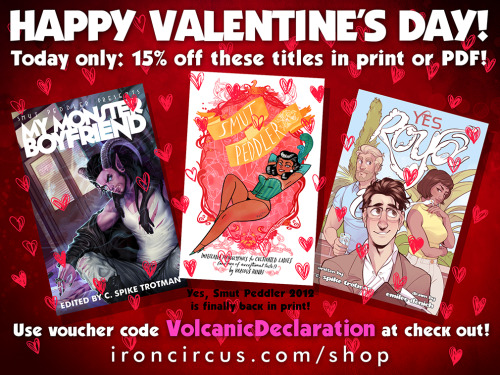 HAPPY VALENTINE’S DAY! print editions of the original Smut Peddler, My Monster Boyfriend and Yes, Roya are finally available in the ICC shop! Miss Iron Circus Comics’ last Kickstarter? Not to worry. PDFs of both My Monster Boyfriend and Yes, Roya are now available in the Iron Circus shop!

Yes, Roya, set in 1960s California, written by @spikedrewthis, drawn by @ghostgreen, and with a cover by @kinomatika, Tells the story of Wylie Kogan. An aspiring artist, a fawning fan letter grants him access to his cartoonist hero, the wealthy and celebrated Joseph Ahlstrom, Wy’s quick to take advantage of a proffered portfolio review … but winds up learning more than he ever wanted to about Joe when he stumbles across some of his idol’s illicit fetish art. His hasty, ill-considered theft of a drawing triggers a series of events he never planned on … most of which involve Joseph’s imposing and resolute partner, Roya.

Grab one, the other or both now, at the ICC store!